Super Bowl XLIX will be held at the University of Phoenix Stadium in Glendale on February 1st. Tickets are 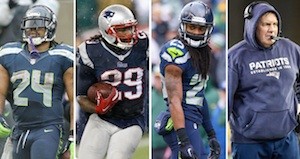 in tight supply to see the New England Patriots and the Seattle Seahawks face-off in the biggest game of the season. The New England Patriots had a great run this year with twelve wins and four losses. The Seattle Seahawks had the same record, just barely knocking the Arizona Cardinals out of the running. Although it would have been very exciting to see Arizona’s team play in their home stadium for the Super Bowl, everyone in Arizona is feeling the excitement of the Super Bowl being located in Glendale.

Tons of events are happening all over the Valley prior to the Big Game. In Downtown Phoenix, there is the NFL Experience going on in the Phoenix Convention Center. Professional football players, both current and former, are signing autographs. There are interactive games and workshops to improve your football skills. Also in Downtown Phoenix is the Verizon Super Bowl Central, a free event with music, football activities and a giant rock climbing wall with a waterfall. (Rock climbing wall costs $5 per person.)

The Corner at Cityscape in Phoenix might be holding the most adorable and fluffy football event. With the help of Animal Planet, they have tons of puppies from the Arizona Humane Society playing a game called Ruff vs. Fluff, a football themed face-off to see which puppies will be victorious. All of the puppies are up for adoption, so if you are looking for a new fluffy addition to your family, this is a great event to attend. Plus, who doesn’t love puppies playing football?

Scottsdale is also hosting Scottsdale Fan Fest at Scottsdale Fashion Square. There are live ESPN broadcasts, fashion shows, food trucks, music, food and drink demonstrations and yoga classes. The entire event is free. If you aren’t attending the Super Bowl, you can tune into NBC to watch the game (and the commercials) at 4:30pm on February 1st.

With the Superbowl in Phoenix, it is an exciting time. The Phoenix area is the place to be with so many sporting events going on. Please feel free to call or email me at (602) 791-0536 or Carmen@TopScottsdaleHomes.com if you are interested in viewing homes for sale in Scottsdale.