New developments in the plans for a mixed-use community called Sterling at Silverleaf are in progress. Located in DC Ranch next to The Village Health Club on Thompson Peak Parkway and Legacy Boulevard, Sterling at Silverleaf currently consists of a dozen single-family custom estates known as the Sterling Villas, though 17 more are still to be built. 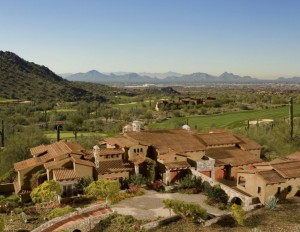 The next phase of this luxury community was originally planned to include seven buildings with 213 luxury condominiums along with over 11,000 square feet of commercial space. Under these plans some of the buildings would reach five stories and be up to 75 feet high.

Some residents of DC Ranch have expressed concerns about the height and issues of accessing the development, specifically the prospect of a secondary access point at the Horseshoe Canyon gate that could pose both security and traffic risks.

Changes to the plans for the Sterling condos have been proposed in order to address these concerns. Though none of the new plans have been confirmed, developers propose that only homeowners in the Villas will have access to the community through the Horseshoe Canyon gate, while condo owners at Sterling would need to use a new gate on Legacy Boulevard.

As for the size of the buildings, developers have suggested plans for five much larger buildings, as compared to the original seven. This change would come at the cost of the amount of public space, such as for landscaping or pools. Under these new plans, the height of the tallest buildings would be marginally reduced.

Proposals for Sterling at Silverleaf are now under review. If you are interested in these or any other luxury homes for sale in Scottsdale AZ, contact me at (602) 791-0536 or by email at Carmen@TopScottsdaleHomes.com.