PGA Tour officials have recently confirmed that caddie races have been banned at both the Waste Management Phoenix Open, hosted at TPC Scottsdale, and the Crown Plaza Invitational at Colonial. Andy Pazner, executive 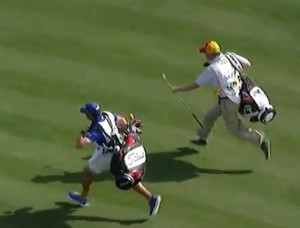 vice president and chief of operations for the tour, made the announcement with GolfChannel.com.

Pazner stated that the decision to ban races at TPC Scottsdale was sparked out of concern for the caddies’ safety. Caddies could risk injury during the 150 yard race, or they could accidentally damage their golfer’s equipment. He has also stated that caddies have come to him complaining about being made into a “carnival show.”

Though the original caddie race took place at Colonial in Fort Worth, Texas, the popular spectacle of caddie races began at TPC Scottsdale on the 16th hole of the Stadium course. During the Phoenix Open, fans would place wagers on whose caddie would make it from tee to green first. At first this was done without the knowledge of the caddies. When it became apparent that bets were being made, caddies began to race each other to the green.

Pazner has been discussing options for a smartphone app that will allow spectators to bet on which player will hit their tee shot the closest to the hole. This may add a measure of fan interaction to soften the blow of the ban.